Push notifications are arguably the most powerful marketing tool available right now to mobile game developers. Those little home screen alerts (as in the ones above from Diver Dogs, which uses One Signal) allow you to have a one-to-one relationship with your best customers on the most competitive, valuable marketing real estate on the planet: the mobile device home screen.

While Android devices allow push notifications by default, iOS devices do not. So if you want to have this direct line to your best customers, you need to ask — and ask nicely. Many game developers will just pop a standard OS permission dialog at the start of the first session, but this is perhaps the most costly mistake in mobile engagement marketing. Some studies show that up to 60% of players will opt out from a standard push notification permission request.

Since you only get one chance to ask for permission, and successful push campaigns can drive up DAU by as much as 50%, let’s look at some techniques to maximize permission opt-in:

1. Use a Custom Pre-Permission Overlay 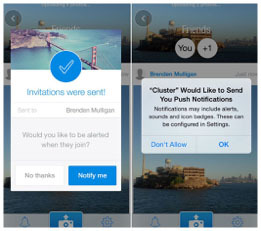 A custom pre-permission overlay can massively improve push notification opt-in (even as high as 100%). By using a custom push dialog ahead of the OS-based permission request you get the opportunity to more clearly communicate the value of your push notifications as well as gauge player interest before giving them the one-shot-only OS dialog.

If a player is interested, an “affirmative” click will trigger the OS dialog, which they’re now more inclined to accept. A “negative” click to the custom overlay offers you the opportunity to wait and try your request again later.

Many (perhaps most) apps ask for push notification permission as soon as they’re first launched, before they’ve established any trust with the player or demonstrated any value. You can trigger your pre-permission overlay and OS dialog at any point you’d like, so identify a place where your players feel good about the game and their relationship with you. Even better, craft your pre-permission dialog to reference your specific timing.

For example, if you send the pre-permission dialog after a campaign is completed, you are targeting a player who is happy about his or her victory, and clearly engaged with campaign content. An example of a good call-to-action message might be: "Congratulations! More Campaign levels are on the way, would you like to know when they’re available?”

Remember, push notifications are most relevant and effective for your engaged players, so there isn’t much advantage to risking a low acceptance rate by putting your request too early in the funnel.

As with all things where optimizing conversion rate is critical, it is important to test the permission funnel, particularly since an ineffective flow can lead to declined permission, which is very difficult to undo.

Components to test and optimize:

It is possible to offer incentives (virtual currency, special items, etc.) to encourage players to accept push notifications. While this may improve your permission acceptance rate, it probably won’t result in that big an increase in actual engagement (views and clicks), unless you also plan to include incentives in your Push campaigns.

Apple’s stance on this sort of incentive is also not entirely clear. As such, if you do choose to offer permission incentives, build in the ability to turn off those campaigns and have an alternate strategy available.

5. Don’t Abandon Players Who Say No

If, despite your best efforts, a player declines push notification permission, you do still have other options:

In your Help or FAQ documentation be sure to provide instructions on how players can turn push notifications on or off through Settings>Notifications>Your App Name on their device.

When you do a client update, players need to re-authorize permission. This gives you a chance to improve your permission funnel and get permission from players who may have previously declined.

Warning! Re-authorizing permission after a client update also means that any player who previously gave you permission will have the chance to decline this time around — which is just one more reason to make sure to use push notifications responsibly by providing high-quality, timely, valuable content.

Because Android grants push notification permission by default, players must actively opt-out if they no longer wish to receive them. Be aware that this means your Android players are likely inundated with push notifications — most of them bad — so quality and creativity will help yours stand out in the crowd.

Following these practices for push notification permission requests can greatly increase the permission acceptance rate among your players, giving you yet another valuable way to deepen their relationship with your game.

You can learn more about how to set up push notifications with PlayFab in our API documentation, or read our support forum thread on the issue. And because a good first impression goes beyond just push notification permission, check out our article on friction-free player authentication for more best practices.