We are at a moment in time where anyone can create a game and where 95% of the available games are free. Last month alone, 13,000 new games were submitted to the U.S. App Store, pushing the total of active games to more than 430,000. Add in the more than 7,000 games available on Steam and almost 2,000 on the three top consoles, and the number of games available today is astonishing. With these conditions, it is nearly impossible for 99% of those games to be discovered at all.

Why is this happening? The answer lies at the source of where games are created, the engines themselves. The battle of the free engines started in 2009 with Unity; then Unreal, Construct 2, Gamemaker, and others all made it possible for anyone who would like to make a game to have the possibility to do so. Their products are not only free but included a marketplace to find assets to speed up development. The entry barriers for making a game have never been so low.

In addition, the fact that publishing games on mobile is relatively easy, compared to console, created a super high ramp-up of mobile games. But because there was a huge influx of new players at the same time, the growth in the user base was enough to absorb the effect of supply.

Signs of a Maturing Market

The growth in users is slowing, however, with a predicted rate of new players in Europe and North America until 2020 at about 3.5% per year compared to 7.3% in the past years. These two markets are particularly important since this is where the users have the most money. Unfortunately, as with any market that starts to mature, the frenzy of new users who want to try everything is almost completely eroded.

When it comes to mobile, players are spending 36% less time playing games than a year ago and only spending in 1.6 games on average, for a total of $33.55 a year.

Another way of looking at this is to compare the growth of installs per device with the cost per installs. In the following two charts from InMobi, it is clear that in more mature markets, the cost per installs keep going up even as the overall install rate goes down. This is because there just aren’t enough players to attract in installing all those new and old games. This is another clear sign that we are entering a new phase. 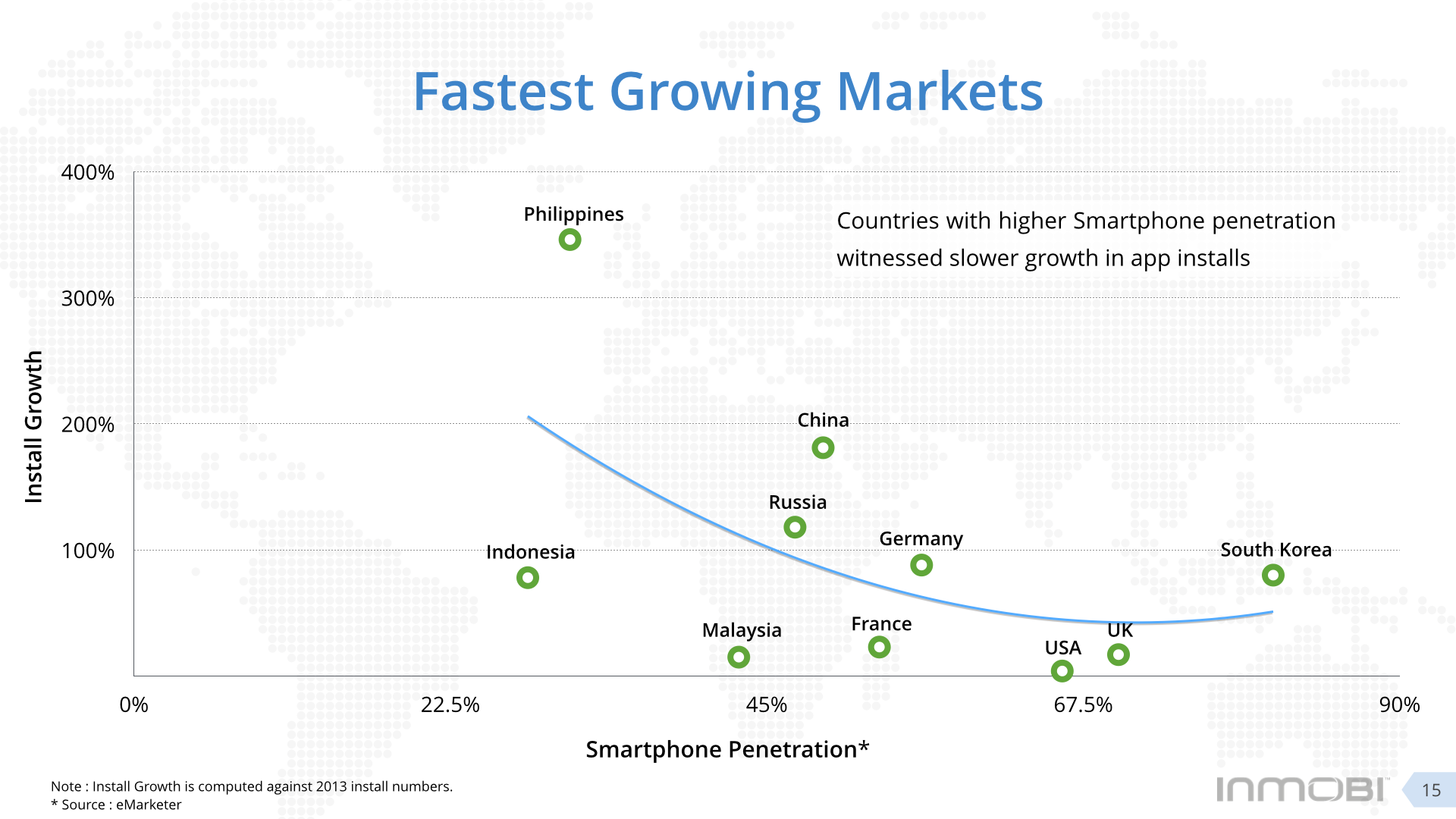 With more than 1 billion smartphone users, Asia will be dominant in the future for its increasing spending and user base. Breaking into that market is challenging for Western developers, but it can be done by developing strong partnerships and choosing the right market for your game. (PlayFab CEO James Gwertzman discussed this in more depth last month.)

One such market might be India, which has a huge population of young people, a tradition of liking Western games, and a well-established Android user base. Indonesia is another market to look at, but of course, like India, each has its own cultural challenges to be aware of.

The global adoption of video games has also opened new verticals like any maturing market. ESports is the most obvious; with stars, leagues, and commentators all making a living off of game video streams. These stars influence millions of players and can help them make decisions about the next game that they will spend their time on.

Video game streaming in general keeps growing at a huge rate, with YouTube and Twitch becoming the main drivers of adoption for many new games. The graph below from SteamSpy shows the impact of YouTube views on Steam sales. The more viewers you have, the more sales you will make. 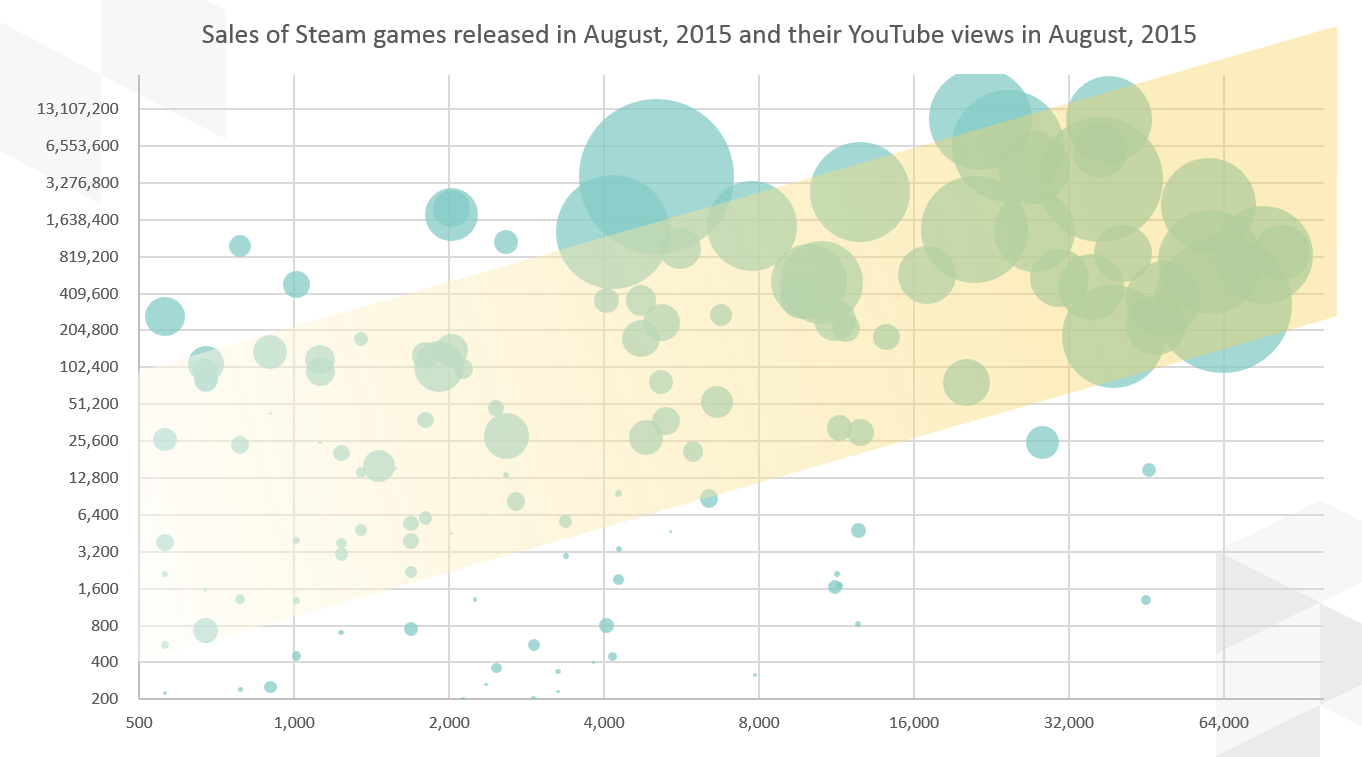 For indies who are just starting, having your game shown by a YouTuber with 100,000+ viewers is already the whole difference between a hit or miss. Not sure where to start? Check out these lists of YouTube and Twitch livestreamers. Giving vouchers to popular livestreamers is a good way to start a relationship with them, and you can give them preview accounts of your upcoming game builds as well. Tracking the success of each streamer from your game analytics will also give you hints about who likes your games, since each streamer covers just a few types of games.

With the room for success getting narrower, live game operations are critical to make a better margin and have a profitable game. What that means will differ depending on your game and your region. For example, in India, the use of in-app advertising will guarantee you some revenue, while in Japan, in-app purchases are driving the revenue. Having tons of content inside your game will also help, because players who play more have the opportunity to spend more. According to Newzoo, players who log more than 10 hrs a week will have a 60% chance to monetize. To achieve this, you either need an amazing gaming loop with replayability, or a really long game with lots of content. In either case, you need to optimize your content and business model for your target.

Welcome to the Future

We now have an inventory of content that is enormous, and new games just keep arriving. These are not trends that are going away. With so many games available, you can’t release a game today and just hope to get discovered.

High quality games that stand above the competition can be seen on every platform, but the margin for profit is still critical. Planning for release is essential for any chance of success and the effort to get your game noticed is 10x bigger than three years ago. You not only have to nurture your community, but also all the people who can promote your game via streams or articles. And if you’re releasing in multiple languages to leverage a bigger audience, you need to do all that work in multiple markets.

The business models are clear: Free games makes more money and there's less money made per game released. The games which succeed the most are the ones that are global and effectively leverage communities. Integrating player accounts, virtual goods, real-money purchasing, analytics, multiplayer, leaderboards, in-game events, push notifications, and others are all in-game features that can help with monetization.

There’s no secret. Live game operations are part of the success.